Last Sunday we contracted with movers to carry another load of stuff from our old house to our new house–stuff from the garage and the basement, including this pool table.  Our other helpers had taken off the base, but it still took quite a bit of maneuvering for the guys to get the table out of the old basement bulkhead entrance.  Then when we got to the new house, it got stuck in the bulkhead entrance here.  It was just that much tighter. 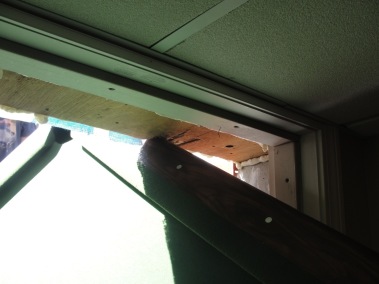 Well, they pulled it back out, and then Margy and one of the movers got creative: they chipped and sawed away at the bulkhead framing, to make a little carve out, and finally, with only a small cracked corner, the table made it into the basement!
Along with the rest of the stuff that we hadn’t really been sure would fit into our smaller space.  Now it is leaning against the wall, until we have a chance to unpack enough boxes to clear a space for it.

Not that everything is out of the old house.  This has been a slow process, and there are still items that we are planning to give away through Freecycle, and Margy still has a few boxes to sort and shred, and then we’re likely to have a dump run.  But it is happening, and it is almost done.

A larger feeling of stuck-ness has been in getting the radon levels in the basement to an acceptable level to our buyers.  Our contract was signed on January 26, and we’ve been in due diligence phase since then–two months.  We’ve gone through 5 radon tests, at least as many visits from radon mitigators, drilling eleven holes in the floor to see what was going on, three more “drops” to the system, many hundreds of dollars, and an exhausted feeling that we’d be stuck in this bad movie forever.  I didn’t even have the energy to blog about it all.

But, today, we got the results of our latest radon test, and it passed!  The realtors are preparing documents, and we expect to have a signed contract by 5 p.m. completing the due diligence phase and setting a closing date for April 14th.  I almost didn’t dare to write that down, the last weeks have been so discouraging.  Who could have guessed it would be so difficult?  But it seems we are finally unstuck and moving forward again.

Advice from Mona Polacca, one of the Council of Thirteen Indigenous Grandmothers: “Know your water.”  Living in the city of Portland, we have city water in our home, which comes from Sebago Lake before it is processed.  So we share a collective responsibility for keeping the water clean.  After being on a private well, it is a bit strange to get a bill for water, but it gives us a better consciousness of its careful use.  (Unfortunately, Portland treats its water with fluoride, which has been implicated as detrimental for thyroid health.  Something to explore for another day.)

But on a more local and personal level, I have been walking around the neighborhood, and discovered a trail near Hall School that goes along Capisic Brook.  We are now in the Capisic Brook watershed. How wonderful to be able to walk to the water!  And this is the water that all the run off from our roads and lawns enters. I found a sign alerting children and everyone to our watershed and the need to clean it up and protect it.  What a great neighborhood effort! 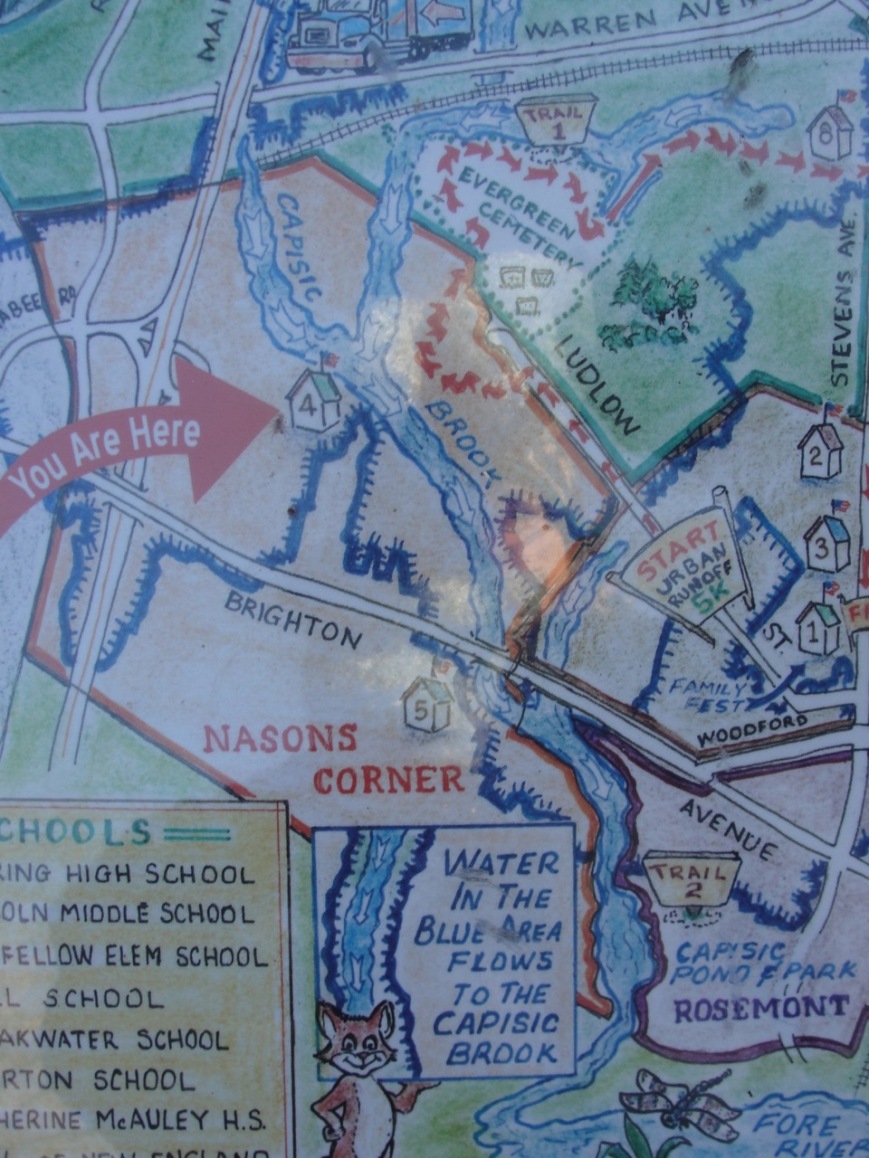 I woke early in the morning, anxious about yet another radon test at our old house, as the rain was coming down and the wind was all stirred up. We’ve had two failed radon tests, before and after upgrades to our mitigation system.  The other day, the mitigation folks were checking on why the radon levels had doubled after their upgrades, but everything  seemed fine, and their instant test meter was showing no problems.  They suggested that perhaps it was an anomaly, and we should retest.

I had read online that radon tends to be at its worst in the winter and/or when it is raining. So I wondered whether that had affected the tests.  According to the mitigation folks, it shouldn’t matter that much.  But both of the tests happened during stormy weather, the last one including a rare winter thunderstorm, with an inch of rain and high wind levels. Now, here we are again, testing, with the rain pouring down, and the sale of our house to these buyers resting on the outcome. Why was it raining once again?

But then my heart took me to a deeper place this morning. I realized that deep in my subconscious I was still attached to that old myth–that when good things happened it was a sign of blessing or favor from the great Mysteries, the Spirits, the Divine benevolence. And its counter:  I believed that when bad things happened it was a sign of abandonment or disfavor.  So I was troubled with the Rain and Wind, the Thunder–Why are you not helping us? I thought. I was wondering if the Rain and Wind were angry with us.

But then, they brought me to a deeper reality.  That myth of blessing or abandonment is the quintessential American myth.  But it is not really true.  Otherwise, what does that mean for the people who have faced many troubles–so much bigger troubles than radon or house sale troubles–are they abandoned or in disfavor with the spirit?  What of every child who has lost a parent, or parent who has lost a child? What of the people who lost lands and cultures to the genocide of the early explorers and settlers? What of the people who were torn from their own countries in chains? What of those who are torn from their homes today, in the wake of war and terrorism? It is not the Spirit who has abandoned them, but perhaps their fellow human beings.

The Spirit remains present with us through everything.  Whether we face happy outcomes or troubles.  Love enfolds us in its widest embrace.  That is the truest reality.  Whether we pass or fail the radon test, the Rain and Wind and Thunder are still our guardians. I have to let my small heart open wide, to move beyond the idea of prayer as an attachment to things going my way, or the easy way, into prayer as an entryway into perceiving that all-embracing Love.

And in the light of that Love, don’t we want the best for the people who are hoping to buy our house?  Don’t we want them to be safe and have the best possible outcome for their home search, even as we hope it for ourselves? If there is a radon problem in the house, don’t we want it to be solved for them? And radon, or a house sale, are so small in the great scheme of things. There are so many bigger challenges that are facing our world today.  Challenges of water and air for all people. Challenges of climate change and war and xenophobia and oppression.

This journey is rooted in an intention–to live in a more beneficial relationship with the earth and all beings. Each step of the way can be imbued with that intention, and can bring us closer to that vision. Along the way, reality will be reality, and if that phrase, “all will be well,” means anything real, it is not dependent on test outcomes or house sales. Now it might be time to take a walk in the rain.

Today, Margy and I took a break from unpacking at our new house, to join with over one hundred other people who packed the Maine Supreme Judicial Court hearing of oral arguments in an appeal against a 45 year contract for water extraction between Fryeburg Water Company and Nestle (for their Poland Spring bottled water brand.) You can find out more about it at https://www.facebook.com/events/905328636212245/

After the hearing, we stood outside the courthouse with signs, which is when I took this photo. Water is utterly basic to life, and should be treated as sacred, not sold to a corporation that has a horrible track record in so many endeavors around the world. I remember most recently, Nestle was continuing to extract water in California, during the worst drought in its history.  We can’t let these giants trample the common good of the earth, without raising our voices.

It was good to be with other human beings who get it.