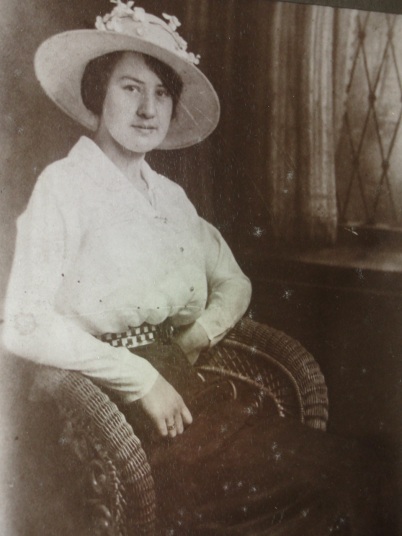 I don’t know the whole story about Elizabeth Warren’s claim to have Native ancestry.  I have heard her mocked by being called “Pocahontas.”  That mockery is wrong on so many counts, not the least of which is the tragic story of the actual Pocahontas that has been obscured and romanticized by American culture and cinema.  But what I want to explore today is the sometimes confusing experience of those of us who are white but have some Native ancestry.

When my siblings and I were growing up, all we really knew was our family stories.  Our mom told us she was part Indian.  She didn’t know what tribe.  It was through her mother’s family, my grandmother Yvonne who came from Quebec to Detroit.  (That is Yvonne’s picture I have included above–taken on the day she crossed the border from Canada to her new life in America with my grandfather.) My mom was proud of being part Indian.  My dad had worked as a cowboy, so we used to joke about our parents being the cowboy and the Indian.

Our family stories opened in my heart a curiosity toward Indigenous peoples. As a young adult I learned more about American Indian political struggles, and began to take what action I could in solidarity.  But I also learned that white people who claimed to have Native ancestry were often joked about, considered Wannabes, and especially tasteless was to claim a great-grandmother who was a Cherokee Indian princess.

Perhaps that was why I was relieved to discover that we were not part Cherokee.  I was the one who researched our family history and learned that we were related to the Innu people, who are indigenous to the land now called Quebec and Labrador. The French settlers called them Montagnais. I learned that the Innu know their land as Nitasinnan, which means “our land.”  Later, in the midst of my activist work, I had a chance to meet Innu activists, working against the hydrodams that Quebec was trying to build on their rivers.

Gradually, I learned more about the Indigenous experience in America, and was able to better understand my own position as a white woman.  But in between my childhood and my better understanding, it was confusing to me.  There were a few occasions that I said I was Native American, many other occasions I kept silent.  My sister once took an art class that she got into because she was 1/16th Indian (we thought).  For a short while, I said I was Metis–mixed–because that was a word used in a book in French that spoke about some of my ancestors.  Not being in Canada, I didn’t know about the actual meaning of that word in English to describe another distinct group.  It took a long time to sort out that it was more accurate and respectful to say that I was white.

This is why I have some sympathy for Elizabeth Warren right now.  With only family stories to guide us, it is hard to sort out the dynamics of race and privilege from cherished ancestral connections.  And the stories of my grandmothers are also meaningful to me still.  I say grandmothers, because it was my matrilineal descent that originated in Nitasinnan.  My Innu great-great-great-grandmother was Marie-Madeleine, who married a Scottish trapper near Chicoutimi, Quebec.  Her daughter was Angele, whose daughter was Claudia, my great-grandmother, and Yvonne’s mother.  When we were kids, we thought we were 1/16 Indian, but it turned out to be 1/32.  Much later, a DNA test confirmed that matrilineal descent.

These grandmothers were gradually–or perhaps quickly–assimilated into the white community, first in Quebec, and then in the United States.  I learned that assimilation itself was part of the long campaign to divide Indigenous people from their land and their history.  When an Indian woman in Canada married a white man, she lost her legal status as an Indian.  So, on the census records for Angele, for example, she was referred to as Scottish like her father.  The mother disappears, through a combination of sexism and racism.  I don’t think the assimilation was without difficulty.  I don’t know the early stories, but my mom mentioned once that her mom and her aunts didn’t go in the sun, because they didn’t want their skin to darken and people to think that they were Indians.

Their lingering shame says something to me about the difficulties of the assimilation process.  And yet–they told the stories–they didn’t forget their ancestry.  And that means something to me as well.  The Innu word for “my grandmother” is Nukum.  Even though I am now very clear about being white, I pray to Nukum for guidance in my life, and she has helped me on my journey.