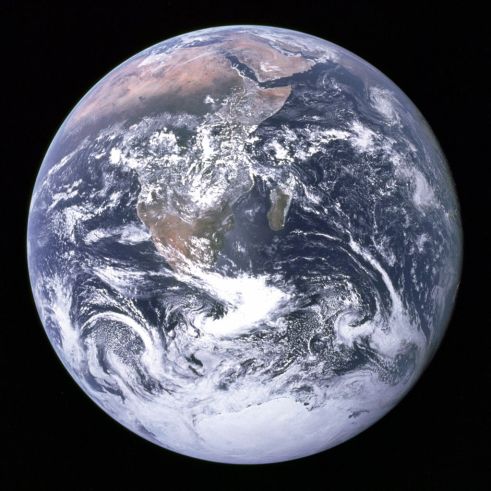 For how many years have people been calling the earth our mother? The image dates to the days before history, in cultures all around the world. And no wonder. Our mother is the one who feeds us. Before we are born, in our mother’s womb, we are literally fed and shaped from out of her body. After we are born, we are fed milk from her body. The earth is our mother because we are created and fed from her body. We are a part of her, and all of our life is out from her.

We live in a time when this ancient understanding is coming to the fore again. During the industrial age, people treated the earth as a resource to be exploited. Whatever could be mined or cut down or damned up or harvested was taken for human use. So much was taken and destroyed that now for the first time in history, we can see the fearful limits of the earth’s abundance. In order to find wholeness, we must restore a relationship of respect and honor between people and the rest of nature. We are beginning to understand that we are not separate from the earth.

Buddhist teacher Thich Naht Hanh speaks about this. He says,

You carry Mother Earth within you. She is not outside of you. Mother Earth is not just your environment… Fear, separation, hate and anger come from the wrong view that you and the earth are two separate entities…. That is a dualistic way of seeing… So …breathe in and be aware of your body and look deeply into it and realise you are the Earth and your consciousness is also the consciousness of the earth…

It is one thing to mentally acknowledge that we are part of the earth, that we and the earth are one. But it is more challenging to experience it in our bones. We have been taught by our culture to think of ourselves as separate from all that. We live in houses that divide the inside from the outside. We think of some things as human and other things as natural. It is a mental leap to imagine ourselves as a part of the larger life of the earth. But if we desire to understand our connection, to awaken our instinct for feeling the unity of it all, connecting to one tree, one rock, or one place, can bring it down to our human level.

Here is a practice for paying attention to a very small place:

Mark out one square foot of earth, perhaps with some sort of string on a few sticks hammered into the ground. Then sit near your square foot, and observe all the life forms you find there. Look for the different kinds of plants—maybe clover and grass and wild strawberries and moss. Look for the insect life—some of it moving in and out, like bumble bees and flies; other staying close, maybe an earthworm or a group of ants. Perhaps you might take pictures of the ones you don’t know, and look for them on the internet, or with a biology teacher or friend.

Then, realize that there are also microscopic life forms in that square foot of soil. Thousands of them. If you are up for it, get a microscope and check out our hidden neighbors in the soil.

Biologists say,
When we are standing on the ground, we are really standing on the roof top of another world. Living in the soil are plant roots, viruses, bacteria, fungi, algae, protozoa, mites, nematodes, worms, ants, maggots and other insects and insect larvae (grubs), and larger animals. Indeed, the volume of living organisms below ground is often far greater than that above ground.

If we are able to touch deeply the historical dimension – through a leaf, a flower, a pebble, a beam of light, a mountain, a river, a bird, or our own body – we touch at the same time the ultimate dimension. The ultimate dimension cannot be described as personal or impersonal, material or spiritual, object or subject of cognition – we say only that it is always shining, and shining on itself.

Thich Naht Hanh quotes from an article by Jo Confino, “Beyond environment: falling back in love with Mother Earth,” Feb 20 2012, The Guardian
Biology quote from Dr. Jill Clapperton and Dr. Megan Ryan, “Uncovering the Real Dirt on No Till”