As I wrote in my last post, European peoples are new to the land we call North America. Our history includes the theft of this land from its original people. We have tried to obscure that history through many stories, perhaps most notably our Thanksgiving myths, the stories of the Pilgrims and the Indians. 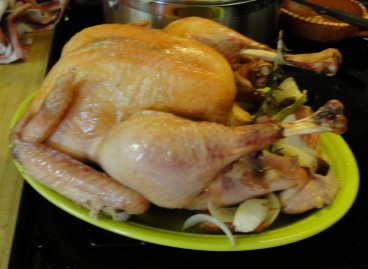 The story tells us when the Pilgrims landed at Plymouth, they were welcomed by the Indian Samoset. He introduced them to Massasoit, chief of the local Indians, the Wampanoag, and to Squanto, who helped the Pilgrims to plant corn, to hunt and fish in their new home, and to survive the first hard year. In the fall, Indians and Pilgrims together celebrated a Thanksgiving for the harvest.

The story of this celebration hides other stories. It hides the plague that wiped out the village of Patuxet, and 90% of the people living on the Northeast Coast. Squanto, whose name was actually Tisquantum, was a survivor because he had been earlier carried off as a slave to England. Did you ever wonder why he could speak English to the Pilgrims? The story hides his capture as a slave, his years in Europe and his attempts to come home, only to find his people gone. But most of all, this story hides the next four hundred years, which were filled with betrayal and enmity and war.

The Pilgrims did not share the Indigenous belief in the sacredness of all beings and places. They saw their own society and ways as superior, as a progress which must be forced on other so-called “inferior” beings. This is the spirit of colonization, from which we haven’t yet recovered. From the Indian side, the colonization of North America has been a long saga of unbearable loss and grief. What irony, then, to watch as non-Indians each year have a holiday celebrating the bond between the Pilgrims and the Indians. Many Native peoples think of Thanksgiving as a Day of Mourning.

Now, the first reaction European Americans sometimes feel when we hear about this loss and grief is defensiveness. After all, we think, it wasn’t me who stole Indian land, or caused disease among the people, or killed anyone. Perhaps the second reaction that comes is a feeling of guilt, because of what our ancestors have done. But neither defensiveness nor guilt is really very helpful. We must go deeper than that. How do we acknowledge and heal the brokenness? How do we restore wholeness to this broken land and all of its people?