A fractal is a pattern that repeats itself, from an infinitely small scale to an infinitely large scale. We see in the patterns and shapes of nature that there is self-similarity at all levels.

This has both practical and mystical applications. I learned about one practical application from a documentary called Hunting the Hidden Dimension. A group of scientists concerned about global warming was trying to determine how much carbon dioxide was absorbed by trees in the rain forest. They could measure the carbon capture of a single leaf, but how could they count the number of leaves in the forest?

They had an idea. They started by measuring the circumference of all of the branches on a single tree. Because of the fractal nature of the tree, the branches form a regular pattern, dividing at certain intervals into smaller and smaller branches. By measuring every branch, they could determine the ratio between branch sizes. Then they took it one step further. They measured the trunks of all of the trees within a given area.

Imagine it with me if you will. If we walk through a forest we see trees of all sizes—small saplings, huge old giants—there is an endless variety of sizes all around us, seemingly in a random pattern. 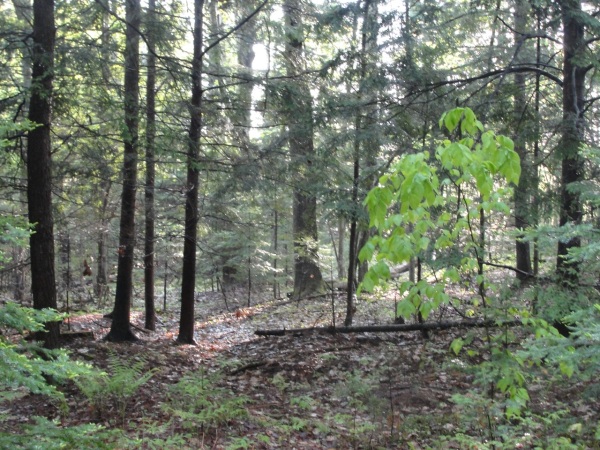 But it turns out it is not so random. The ratio of tree sizes in an area of forest is approximately the same as the ratio of branch sizes on a single tree. There is a pattern to it. And by learning the patterns, the scientists could compute how many leaves were in the forest, and how much carbon dioxide they would absorb.

Now when I walk through the forest near my home, I remember this experiment, and look with wonder at the trees around me. What seemed chaotic and random before, is now bursting with new meaning, full of patterns that start to reveal themselves to me, as I gaze with deeper insight. My experience of the trees’ beauty expands, and I feel a growing sense of awe.

I find myself looking for fractal patterns everywhere. This new understanding has changed the way I see the world. And it is not only visual. I can feel the patterns in bark with my fingertips, and I start to listen for patterns in the sounds I hear as well. Next time you look at a spider’s web, or gaze into the clouds in the sky, watch for the fractal patterns.

Our ability to measure fractal patterns in the natural world has also given us the ability to create digital worlds that remind us of our own. Fractal formulas are used to generate computer graphics that look realistically like mountain ranges, and rivers, and forests, and clouds. That wasn’t possible just a few decades ago.

Fractals have been used to design antennas in greatly reduced sizes, which enabled the creation of the next generation of cell phones and other electronic communicators. Fractal geometry is enlarging our ability to create new devices that work better, because they follow patterns that resonate with the natural patterns around us.