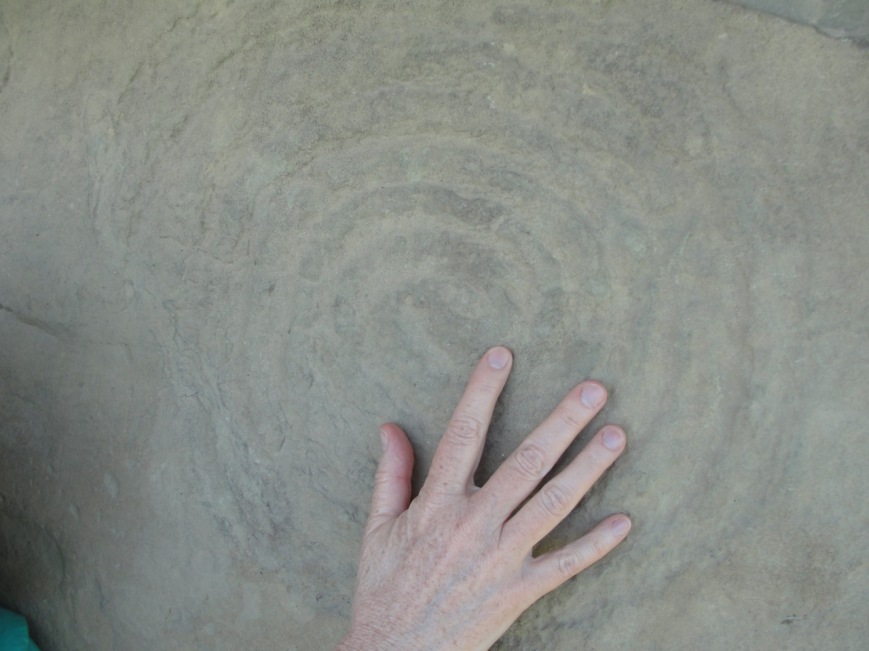 Thursday, Margy and I went to the ancient sites of Knowth and Newgrange.  Built by neolithic stone age peoples about 5200 years ago, they were burial mounds and ritual centers, aligned with the sun at certain points of the year.  We had heard about Newgrange, where the light from the sun at dawn enters the burial chamber on the Winter Solstice.  But we were even more impressed by Knowth, where tourists are not able to go into the burial chambers–too dangerous–but can walk up to the top of the mound.  There are huge boulders that surround and support the mound, called curb stones, and most of them are covered in geometric images–spirals, triangles, undulating serpent like forms.  We could photograph and touch this art created before the pyramids were built in Egypt.  It is a UNESCO world heritage site because of this high concentration of neolithic art. What an astonishing feeling to trace a spiral that was carved so many generations ago by the ancients!  Our guide said that similar stone carved art with the same kinds of geometric patterns can be found all around the world–America and Australia, for example.  Until fifty years ago or so, all these stones at Knowth were buried under soil–the mounds looked like an extension of the hills.  Then, archaeologists began to excavate and discovered the careful construction and design of the burial passages and chambers, were able to carbon date the remains, and restored the mounds to their neolithic era appearance.  All of the stones are original, and the guides reminded us of the sacred and beloved nature of the site. After this visit I got to thinking about ancient mounds in the United States.  I barely knew anything about them, except that they were built by early indigenous peoples of this land, and that many have been destroyed or are even now being threatened with destruction.  Most recently, I heard about a new football stadium being planned in St. Louis that would destroy the remains, now underground, of a burial site and city.  Since no federal money is involved, there are no laws demanding that they even do archeological investigation. I wonder why our country doesn’t take care of these precious artifacts from the ancients on this land?  In a time when there is international outcry over destruction of ancient sites in Syria, where is the outcry over destruction of ancient sites in America?  I suppose it is directly related to our society’s general insistence on forgetting that these lands once belonged to another people.  As to the mounds that do still exist, I have read that there was much early resistance to thinking that Native peoples would have the expertise to build such structures.  Racism then, must surely underly this disregard, and perhaps the overarching allegiance to the gods of money and profit.  And the brokenness of our times, the forgetting that the land is full of sacredness in her essence and in her history.