Chives after the rain

Everything is green now. I go outside and do what I can in the garden. Inside, I finished watching the Ken Burns series The West. One of its stories has really stayed on my mind–the story of a well-meaning white woman who tried to help, but ended up causing harm to Native peoples. I think about how often that pattern has repeated itself in the last 150 years. And I wonder, how do we keep from repeating it again?

Alice Fletcher was a white upper-class feminist, one of those women that we lesbians of my generation have been so thrilled to discover–because she lived and worked with her romantic companion, Jane Gay.  Born in 1838, she went to “the best schools” and was active in the feminist and suffrage groups of New York city. Eventually she found a mentor, the director of the Peabody Museum, to study anthropology and archeology.  In 1881 she lived with and studied the Omaha Indians of Nebraska. She appreciated the culture and became close to many people there, even adopting a son, Francis La Flesche, who himself became a professional ethnologist.  She and he published a multitude of articles and books about Indigenous culture and music.

But she also came to the conclusion that Indian people needed to be brought into the mainstream life of America culture. According to PBS,

Containment had been the goal of federal Indian policy throughout much of the nineteenth century, but in 1883 a group of white church leaders, social reformers and government officials met at Mohonk Lake, New York, to chart a new, more humane course of action. Calling themselves “Friends of the Indian,” they proposed to remold Native Americans into mainstream citizens and to begin this process by re-educating the youngest generation at special Indian schools.

Alice Fletcher devoted herself to pressuring the government for the allotment policy: the breakup of tribal landholdings into individual holdings. “Friends of the Indians” thought it would be good for Native peoples to become more like their white neighbors, to farm, to own their own land individually, rather than collectively.

But allotment failed drastically in so many ways.  First of all, it failed to honor the choices of Indigenous peoples–most of them did not want allotments but were forced into it. And ultimately, it robbed Native nations of millions of acres of their land, and undermined their cultural sovereignty as nations.

Between the passage of the Dawes Act in 1887 and its repeal under the New Deal in 1934, allotment continually deprived Indians of many of their remaining lands. The outright sale of “surplus” lands — parts of reservations left over after allotments had been assigned — and the subsequent sale of allotted lands themselves shrunk the Indian estate from about 150 million acres before the Dawes Act to 104 million acres by 1890, to 77 million by 1900, and to 48 million by 1934. By the time of its repeal, according to one study, two-thirds of the Indian population was “either completely landless or did not own enough land to make a subsistence living.”

Alice Fletcher thought she was a friend, helping, doing something good for Native peoples.  But her help caused harm.  No wonder Indigenous people are cautious about those of us who might show up eager to “help.”  Patterns.  And how do we know that what we think of as help might later be revealed to have caused harm?  Let’s ponder that question for a while. 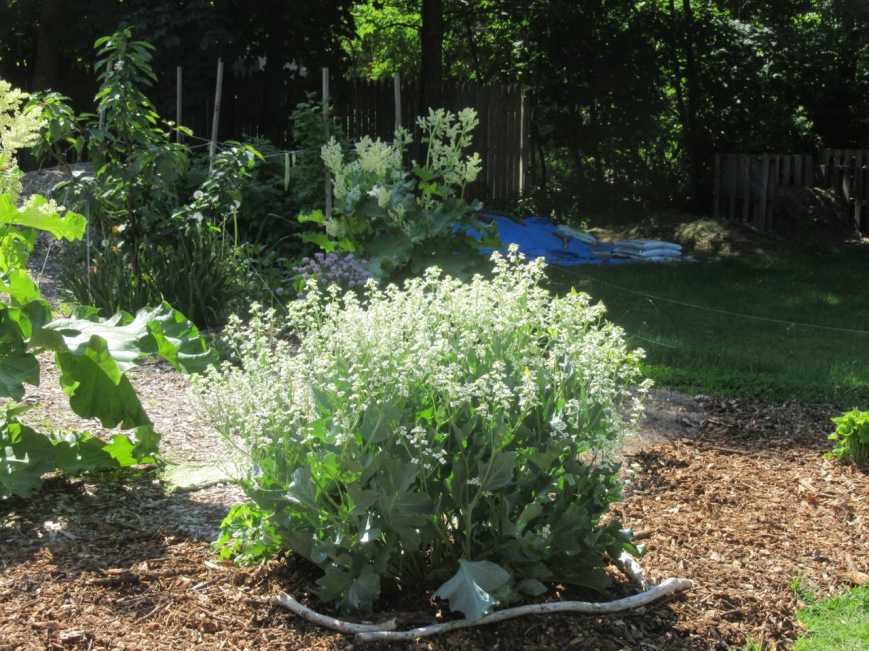 The perennial sea kale in bloom smells like honey.

One thought on ““Friends of the Indian””