On my walk this morning I saw this lovely waning half moon, and remembered a conversation after our Candlemas ritual.  Most people have no idea how the cycles of the moon work.  We don’t learn about it in school.  Years ago, when I was in my twenties, I was curious about why I saw the moon sometimes in the evening and sometimes in the morning with different degrees of light and shade.  So I investigated. (This was before Google–how did I do that?)  I learned that the moon follows a consistent and lovely rhythm. I talk about it in my book Finding Our Way Home.

The moon is always half in light and half in darkness from the light of the sun. When the moon is full, we are seeing the whole of its light side, because the sun and moon are on opposite sides of our sky. The full moon rises at sunset and stays in the sky all night, setting at sunrise. Then, as the days go by, we see less of the light of the moon and more of its shadow, and it rises about fifty minutes later each day, until there is only a waning crescent in the morning just before and after dawn. About two weeks after the full moon, the moon rises unseen with the sun and sets invisibly with the sun. The night is dark. This is called the dark moon or the new moon. Then a day or two later, a thin waxing crescent appears in the western sky just after sunset and sets soon after. Each day it is seen in the evening for a little longer time until we come round to full moon again.

What is sad and funny to me is when fiction writers misplace the moon–for example most recently, I read a line something like this one: “I saw the waxing gibbous moon in the morning light.”  The thing is, no one will ever see a waxing moon in the morning light.  Waxing moons are only seen in the evening.  Am I a nature snob if I want the moon to be accurately represented in fiction?  The actual realities of the moon’s cycles are beautiful and magical–like a cosmic dance, which it accurately is.  Here is a rather fuzzy photo of a waxing moon, taken about 8 p.m. in April several years ago.

The stars also form a pattern to our eyes in the night sky. They circle around the north star, so that when people take a time-lapse photo, you see the lines in circles around the north star. Of course, it is really the earth that is moving, spinning on its axis pointing toward our north star. Every spinning planet will have its own north star. The ancients used to tell time by the stars. If you were to track the big dipper, you could watch it move around the sky during the night, and if you watched it over many weeks, you’d see it was in a different place in the circle, each month of the year.

We are creatures of time. Our ancestors were watching all these patterns, learning them and tracking them so they might tell their children, marking them so we would know how to plant and harvest and hunt, and dance our own dance of time. They were much wiser than most of us at reading the natural signs of time, though our scientists have followed in their footsteps. And so we mark with our machines the minutes and the hours and the days and the seasons and the years. We look back and we look ahead.

Our relationship with past and future brings us the awareness of our own mortality—that for us, and for all living beings, someday, time will cease. Often, we feel pain about that. We feel broken-hearted when those we love are no longer with us, or when something threatens their lives. We can see that some animals grieve when their companions die, but they don’t seem to anticipate death like we do. Our ancestors also wondered about death, and passed on to us their questions about what happens when we die, and their speculations and beliefs about it.

Some ancestors believed that there was another dimension that opened up after time ended—they called it eternity. There were many theories about what eternity might be like, some of which included endless misery or endless joy, depending upon our actions during our time. Others spoke of a cyclical process of rebirth, that we end one lifetime and begin another, until we experience all that we need to experience. In our own era, all these beliefs survive, as well as more skeptical viewpoints that propose that as creatures of time, death is the end, that there is nothing of the individual consciousness that survives beyond time.

Morning View from our Campsite

One summer, I was sitting at our campsite at Winslow Park, watching the sun rise over the water. It was a day without a lot of plans, so I could sit and watch the sky and water for a long time. I noticed how fast the sun seemed to move up the sky. I heard somewhere that you can estimate the time by holding up your fist sideways, and counting each fist width from the horizon to the sun as an hour. In a simpler world, it was enough to tell time by noticing where the sun was in the sky.

Curious about this, I discovered that actually, if you took a picture of the sun at noon every day for a year, you’d find that it wasn’t in the same spot at all. Rather, you’d have a photo of an elliptical shape, like a lopsided figure eight. People call this path of the sun an analemma. It is formed from the fact that our orbit is not an exact circle, but an ellipse, and our planet is tilted relative to its orbit around the sun. So we have the seasons, and each day from June to December the sun rises a few minutes later, and a little bit further to the south, passing by due east on Equinox.

The natural world is full of these movements that follow their own intricate rhythms and orderly patterns. As I become aware of them, I begin to feel myself as a part of a vast dance with the sun, the earth, the moon, the stars. Our spiritual journey is such a dance—it too follows intricate rhythms and mysterious patterns. We may imagine that we are going forward, but perhaps we are dancing round and round like the moon.

Each day, the moon rises on average fifty minutes later than the previous day, and the high and low tides are changing at a similar pace. Winslow Park has a tidal beach, so we pay attention to the tides in the summer. You can only swim for about two hours before and after the high tide. One of our city friends didn’t understand about tides. We were planning to go swimming with her on a Wednesday. Two days before, she was visiting the beach and called us from there to make plans. “The sign at the beach house says high tide is at 2 p.m.,” she said, “Shall we meet at 2 on Wednesday?” We had to explain to her that the tide would be later in two days, closer to 3:40 p.m.; that it changes every day.

Once, years ago, I created a moon calendar for my stepdaughter Stephanie, who was six years old at the time. I was curious myself about why the moon was sometimes seen in the morning, and sometimes in the evening, and I thought it would be fun to learn about it and share it with her. So I tracked it, and began to understand its pattern.

The full moon rises at sunset and stays in the sky all night, setting at sunrise. Then, as the days go by, the moon begins to grow smaller, and it rises about fifty minutes later each day, until you can only see it in the morning just before and after dawn. About two weeks after the full moon, the moon rises unseen with the sun and sets invisibly with the sun. The night is dark. This is called the dark moon or the new moon. Then a day or two later, a thin waxing crescent appears in the western sky just after sunset and sets soon after. Each day it is seen in the evening for a little longer time until we come round to full moon again. 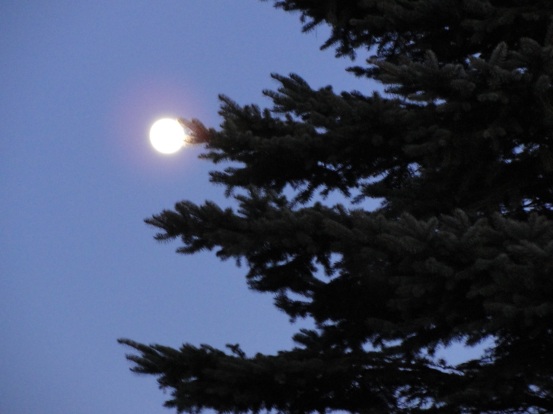 Nothing moves in a straight line,
But in arcs, epicycles, spirals and gyres.
Nothing living grows in cubes, cones, or rhomboids,
But we take a little here and we give a little there,
And the wind blows right through us…
Marge Piercy

My colleague the Rabbi fell on some ice in the parking lot of her congregation in December of 2009. Several months later, she was diagnosed with a brain injury, and was unable to work any longer. In 2011, she started a beautiful blog called Brainstorm. In her blog, she described one of the curious ways that her brain is different now. She writes:

I didn’t notice that I no longer broke time up into chunks like minutes, hours, days. In, fact, I didn’t notice there was such a thing as time at all. I still don’t feel time. I don’t know what day it is. I have a watch that tells me and I am learning to memorize that information in rehab. If you and I meet and begin to talk, I will be totally present. I have attained Buddha-hood; there is no before or after — only now.2

Later, she asks, “How long is a year anyway? Is it before lunch or after? And is February leaves, snow, mud or sun? That is how I tell time. … We are either in leaves or mud right now. it is hard to tell.” “Soon we will stack logs for the wood stove. Put on socks and fleece, sit on the porch swing and drink tomato soup in the mugs the children made.  I do not feel months, days or dates, but I haven’t lost the seasons. I never knew how precious they were until I lost every other marker of time’s passage.”

We think that time moves relentlessly in a straight line, going from past to present to future. Similarly, we might imagine our spiritual journey as a going forward from one thing to another. But our relationship to time is mysterious, located in a spot in our brain which can be damaged or destroyed. If that happens, then linear time disappears. But the circular patterns of movement are still observable. All around us there is evidence that life moves in cycles: the earth spinning around its axis each day and night, planets spinning around the sun, tides going in and out, the stars circling round the night sky.

Some cycles are easier to notice than others. Here in Maine, the autumn comes with bright colors and the falling of leaves. Winter is cold and snowy, spring full of mud and new plants, summer warm and full of plentiful greens. These seasonal changes register in a deep layer of our minds.

Poem Excerpt from Marge Piercy, “I Saw Her Dancing,” in Available Light, p. 118.