Yesterday I began sorting and packing in the basement.  Here is a pile of stuff all packed and ready to go to our new house!  I also made an area for things we didn’t want, and at the end of the day I put several boxes in my car ready to go to Goodwill.  But here is what is left to do:

It was a bit overwhelming to even think about how to get through all this, until I just decided to start in one corner, which happened to be our camping equipment, and do that, and then when that was done, to move on to the next area.  I guess that is a good remedy for many overwhelming things in life–start someplace and take it one step at a time.

Since I had the day off, it was a good chance for Margy and I to confer on various items–we got through Christmas decorations, and baskets, and pots for planting:  What can we get rid of? What do we want to keep?  Then, I would put them in boxes and seal and label and put them in the packed-and-ready corner.

Meanwhile, Margy was sealing cracks in the concrete floor.  When we first bought our house, the basement had tested too high for radon levels.  A mitigation system was installed–you can see part of it in the photo above–the white piping goes down underneath the floor to draw radon from the soil.  The piping goes up through a closet into the attic and out through the top of the roof.  A fan in the pipe in the attic creates a negative pressure to pull the radon gases through the piping, so it doesn’t seep into the basement.  But part of what makes it work is to seal all the cracks in the floor.

We haven’t been much concerned about it for a while.  Since we don’t spend much time in the basement, it has not mattered so much to us.  But our home buyers are having their home inspection done this week, including a radon test.  We are hoping the extra effort to seal the cracks will ensure the mitigation system is doing its job, and the basement levels will pass the test.

Radon is a big issue for housing all across the United States.  Radon is a naturally occurring radioactive gas, but if humans are exposed to too much, it increases our risk of lung cancer.  This can be an issue for very energy efficient houses, because they are more tightly sealed, which makes for less air flow.  Have you had radon levels tested in your home?

As part of our downsizing, simplifying, and search for a greener home, I have been cleaning up old financial records that I had basically just boxed up and kept forever. I checked online sources to figure out which records I actually needed to keep and which ones I could throw away and recycle.

I found out that the IRS has three years from your income tax filing to audit your tax return for miscellaneous errors, and six years if they suspect you of underreporting income, so they suggest you keep all your returns and documentation for seven years. As a minister, this means I must also keep the documentation for all housing expenses, since our housing allowance is treated differently for taxes than regular salary. I have also read that I should keep anything related to purchase or sale of a house, and permanent improvements to the house. (If you think you might want to do some shredding, please do your own research on this, because I am not an accountant or tax expert.)

I have been doing this process for an hour or two at a time, because the shredder gets tired after a bit of time, and I do too. I’ve fed it thousands of old receipts, old bills, old bank statements, old tax returns. I have filled up four huge trash containers with paper for recycling. I am just getting up to the seven-year mark in my papers–starting from many years ago I’m finished up to 2007. What am I learning? It takes almost as much work to eliminate old papers as it did to acquire them. Finances have gotten so complicated that they take more time and energy than I want to give to them. In the financial world “green” does not refer to environmentally sustainable.

It makes me realize that the structure of our society’s economic system is based on fear and anxiety. The IRS is the adversary who might bang at our door and discover we threw away the letter acknowledging a donation. I am not against the idea of taxes or contributions to social security. (I don’t appreciate that so much of the money goes to weapons and war.) Ideally, taxes are the way we support the Common Good, the way we recognize and contribute to shared resources like roads and firefighters and schools and libraries and care for our elders. I wish healthcare for everyone was also included among those shared resources. I deeply value giving energy to the Common Good.

And I wish there were a way to approach it all beyond anxiety and the complicated accumulation of records. I am curious if others have found a way to truly simplify the financial processes in our lives? 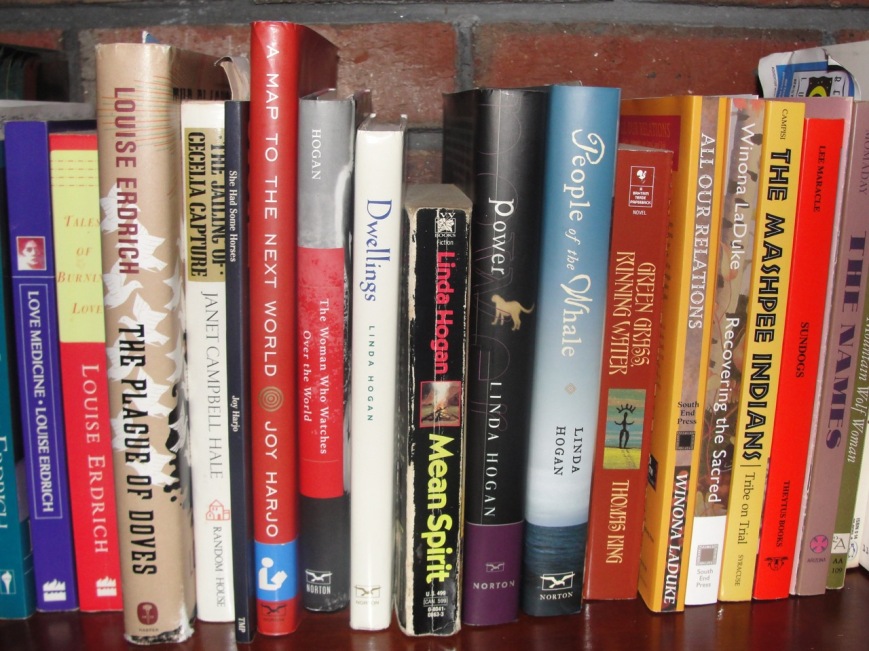 Even when there are no new houses to look at, there is plenty to keep me busy. Another side of searching for greener housing is getting ready for the move into a smaller place. This means paring down what we have collected over the years in a space that has abundant room for keeping things.

First stop: Books. I have shelves full of books that I have read and loved for many years. But I also have developed an allergy to any book that is more than a few years old. If I want to read one of my older books, I have to put on a mask and gloves, and even then I might get a headache from it. So perhaps now is a good time to let go of most of these old friends, and to pass them along to others who can enjoy them.

I had to take a deep breath when I thought about actually giving away my books. I decided to take pictures of the books on the shelf, because it makes me happy to see the titles there. And I still have to keep a few of my long-time, life-changing favorites. Even with a mask, I might need to read them again. I will also keep the books I am currently using in my work. In other words–I will still have a lot of books, just not as many as before.

I learned that our local independent bookstore, Longfellow Books, will take used books in trade for store credit. You can only bring in one bag or box at a time. My first grocery-size brown bag netted about $14 in store credit. It’s not a way to get rich, or even get very many new books. But it is a way to re-use and re-cycle and get a few new books, and support a great local institution.

I also did some research to see if prisons would accept book donations for their libraries–but I learned that certain ingenious addicts had figured out a way to import drugs into the prisons through book donations from their friends–so no more donations are accepted from individuals. But then, I heard about a Native group collecting books by Native authors to donate to the prison for the benefit of American Indian prisoners in Maine. I can’t imagine a better home for these particular treasures. I gathered two boxes that I will drop off.

I now know that the Portland Public Library will take book donations, and that Preble Street accepts donations of books and magazines for its center for homeless youth and adults.

There is a kind of joy in simplifying one’s life, in having fewer possessions to haul around. But it is an even deeper joy to think that someone else might be inspired through these books, by insights and stories that were so important to me on my journey.