Indigenous spiritual traditions are inextricably woven into the network of relationships within an Indigenous community and in the particular land in which that community lives. They are a fundamental element of the Native struggle against the destruction of their cultures and homes. They are not meant to be exported piecemeal for some other purpose, however earnest it may be. If we seek to avoid spiritual theft, the best tool we can use is for us to do our own spiritual work.

If we are seeking to reconnect to the earth, we must remind ourselves that non-Indian people are no less a part of the earth than Indians, even though we are not indigenous to this place. In reality, we all live here on this land and our lives are equally enmeshed with the fate of countless other beings around us. This land, broken as she is, is our only source of food and water. And this land is full of nourishment for us, both material and spiritual. We can love the earth, and be loved by the earth, even if she keeps some secrets from us. Step by step, we must rebuild our own culture’s relationship to the earth. Even though we might learn from the wisdom and experience of Indigenous peoples, no one else can do the work for us.

One summer, I learned that by eating local honey, I could help the hay-fever I suffered from in summertime. By eating that local honey I could begin to make a relationship between my body and the plants which grow in that place. There has been a resurgence of interest in eating foods that are locally grown. Along with the environmental benefits, there are also these spiritual ones, this reweaving of a connection with our bodies to a place. It is our connection to a specific place, the place we live, which forms the doorway for us to hear the earth, to find her sacredness.

A sacred understanding of land is not entirely foreign to European culture. Until the advent of capitalism, land was seen in a more communal fashion. Europeans had their own indigenous traditions to connect them to their land, many of which survived even into Christian times. We see traces of this in our holidays even here in this country—the evergreen trees of the winter festival, the foods we prepare for special times of the year. Many people are seeking to relearn these old European earth traditions. 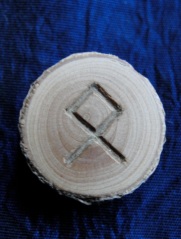 There is a rune, part of the early Germanic ritual alphabet, called Othila, whose sacred meaning is “inherited land.” It describes the relationship between people and the land on which they live. In Germanic countries, there is still a legal right called the right of odal. It means that a person living on a particular estate has the right to stay and live on that estate after the owner has died.

In 17th century England, there was a movement of people called the Diggers, who were protesting the fencing off of common lands and believed that the land could not be owned by private individuals. A love for the earth has many roots in our European ancestors’ ways.