Following our dream of finding greener and accessible housing, we have now looked at six houses. The first was in a great location (halfway between the houses of two friends!) and had an amazingly private back yard, despite being right in town, though it was hard to get to the yard from the house. It had an almost south facing roof, but narrow hallways, and we couldn’t imagine how we could make it accessible without major reconstruction. Plus, there was a tenant in the basement who had lived there over 25 years, and the house wouldn’t have worked for us without the basement space. Bad karma?

The second house had such great character–it was a house we would love to live in. There were blueberries and raspberries in the yard, which we were told we could pick, and so we did. 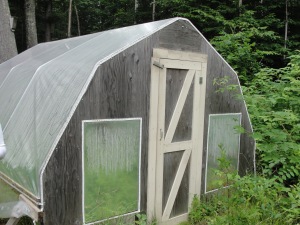 There were gardens and a hoop house for extending the growing season. Lots of windows, sunny, and though it was a bit out of town, it was close to a lake, which was a nice bonus. There was not quite as much work to make it accessible, (though still some) but it was a very old house, and there was water along the edges of the basement–along with a mildew smell. And because of the unique shape of the house, it might be hard to insulate and put up solar. Regretfully, we decided it was too much to take on.

The third house had a great open living/dining/kitchen area, a lovely back deck, and also a great yard–though the very back of it fronted onto an in-use railroad track. It looked like we could put solar on the garage. But the bedrooms were dark and felt small, and there were two very tiny bathrooms that would have to be remodeled into one. We talked about whether we could put in more windows. Also there were a lot of steps to the front door.

The fourth house was on a busy street, too small, and not really worth looking at.

The fifth house was fully accessible! It had a lovely open kitchen/living area, a great deck, and nice bedrooms and bathroom. BUT–it was larger than our current house, and so that didn’t fit our goal of downsizing and having fewer expenses. They said it had been insulated, but it had used quite a bit more gallons of oil over the season than where we are now. However, it was great to see what someone else had done for accessibility and beauty.

The sixth house inspired a long conversation with our green-building savvy real estate agent. (That was one of our practical steps–to find an environmentally experienced agent!) The house was in great shape, with a lovely living room with a fireplace, a big mud room, two nice sized bedrooms on the first floor and extra finished space in the basement. It had a one car garage that probably could have been expanded to two ($), we’d need to remodel the bathroom for access, widen a doorway–and once again, it was an odd-shaped roof, so solar might be more expensive. Plus it had these great old cast iron radiators along the baseboards, but if we went electric they would all have to come out with much ado. And even with a lot of work, we probably couldn’t get to zero-carbon in this house, would have to keep using oil.

Our agent suggested that with all of these houses we’d seen so far, we were trying to squeeze ourselves into a house that wasn’t really quite right for what we wanted. Each one would require a lot of renovations in addition to solar and air-source heat pumps and insulation. It is an emotional up and down–excitement over houses that seem worth seeing, and in some ways are so close to what we want, or have such nice qualities, but then the disappoint that they don’t quite work. AND tomorrow could mean another house comes on the market that could be just right.

3 thoughts on “The Search for Greener Housing, Part Three”