As I explore my Germanic ancestors,  I have been struck by the repeated rise and fall of empires in Europe, somehow timely during these days in the United States when it seems that the impulse to empire is battling the impulse to democracy.  I didn’t study much European history during my educational exploits, so much of this has been new information. But most important to me, it seemed that the places where my ancestors lived were deeply shaped by the struggles of empires.

My grandfather Hochreiter’s birthplace, Linz, Austria, for example, was first named “Lentia” during the Roman Empire, one of the many frontier fortifications along the Danube River.  The Rhine River was also pivotal to the Roman frontier, and the Gerling’s town of Osterath was near the old Roman frontier settlement of Novaeseum, now Neuss.

The fall of the Roman Empire saw the rise of the Frankish Empire, the center of which was in the Rhineland. From Wikipedia:

Julius Caesar conquered the Celtic tribes on the West bank, and Augustus established numerous fortified posts on the Rhine, but the Romans never succeeded in gaining a firm footing on the East bank. As the power of the Roman empire declined the Franks pushed forward along both banks of the Rhine, and by the end of the 5th century had conquered all the lands that had formerly been under Roman influence. The Frankish conquerors of the Rhenish districts were singularly little affected by the culture of the Roman provincials they subdued, and all traces of Roman civilization were submerged. By the 8th century, the Frankish dominion was firmly established in western Germania and northern Gaul.

On the map below, the dark green area of “Austrasia” is centered in the Lower Rhineland. (Note that the city of Cologne is just south of where my ancestors were from many centuries later. They lived on the west/left bank of the Rhine.) 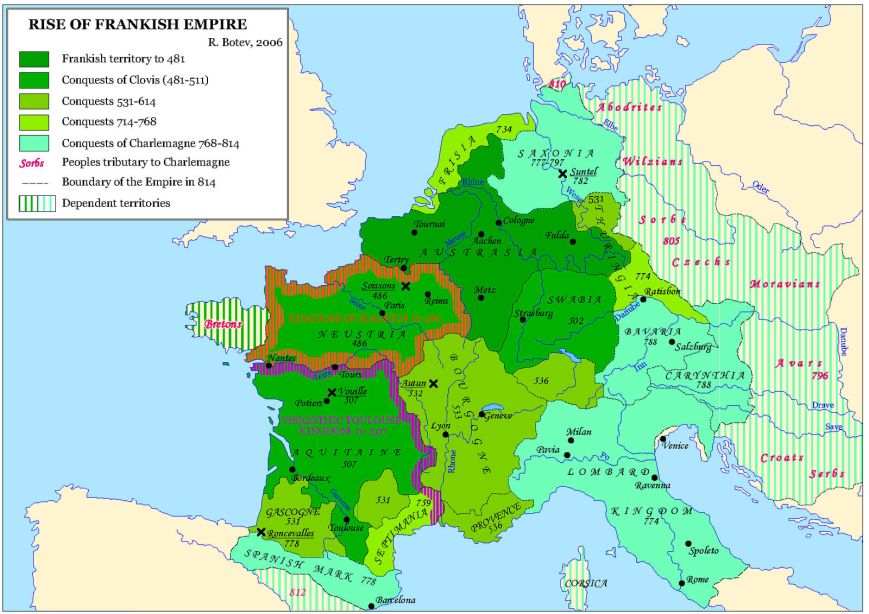 I somehow had always thought of Charlemagne as French, but he was actually Frankish, and likely born in the lower Rhineland area as well. The center of his court was in Aachen. The Franks were precursors to both modern France and Germany. Perhaps this explains something that my grandmother Johnson said about her family being both German and French. The Rhineland where they were from was Frankish, and went back and forth in later days between Germanic and French rule.

Soon after Charlemagne, his empire was divided into three parts.  I will skip right over the “Holy Roman Empire,” which was mostly a Germanic coalition of many kingdoms and cities that persisted through to the time of Napoleon. (My apologies to all true historians!)  But moving closer to the time before my own Gerling ancestors emigrated, the whole of the left bank of the Rhine was taken by Napoleon’s empire for France in 1795. I found out more about this time from a very helpful website describing the Rhineland Under the French.

The “Rhineland” only emerged as a united political entity in the first half of the 19th century. Before 1794 the area on both sides of the Rhine, between the river Moselle and the Dutch border, comprised a patchwork “rag-rug”, made up of many different territories and princedoms. …The French Revolution of 1789 was the event which influenced the political landscape in that epoch, beyond the borders of France and also in the longer term. …In 1794 revolutionary France conquered the regions left of the Rhine, which Napoleon subsequently annexed in 1801. They were systematically brought into line with the legal, administrative and political conditions in France. In 1802 the French constitution, le Code Civil, was introduced. The achievements of the revolution enacted in the Code Civil included the equality of all people before the law, an independent judiciary and the universal right to vote. However, “people” were still only defined as men; women were regarded as the chattels of men and were not recognized as independent persons.

It seems that the forces of empire and the forces of democratic ideals were beginning to wrestle with each other in those times, and I am very curious what my Gerling ancestors might have made of it all. Gerhard Gerling is described as a “hotel meister” (manager?) so he would have fit into the newly emerging class of small business people–whether by owning or working in a hotel.

In 1815, Prussia gained control of the area, and it became the new Prussian Rhine Province, but it had been irrevocably shaped by the prior years.

In 1815 the time of French influence was over, but had left behind far-reaching changes, which had been appreciated as a change for the better, especially in the areas of commercial law and administration. Therefore the population also resisted having to sacrifice such achievements for the sake of Prussian citizenship.

One thing that I wonder about. When sources say, “France took control,” or “Prussia took control”–they don’t mention the armies or the battles or what human cost might have been part of these shifts of power. It must have been difficult to live on the edges of these empires. In 1840, France threatened once more to claim the west bank, but it did not materialize. That was the year that the Gerlings, and many in their town of Osterath left it all behind to come to Missouri.