So I come round to the question, What does it mean for me to be of 1/4 Austrian heritage? All of my ancestor research has been linked to my quest to understand the colonization process, and how my family fits into that long history. How might I be connected to my Austrian ancestors, and how were they connected to the land where they lived?  What might I learn from them? I have had very mixed and often troubled feelings during this particular search. 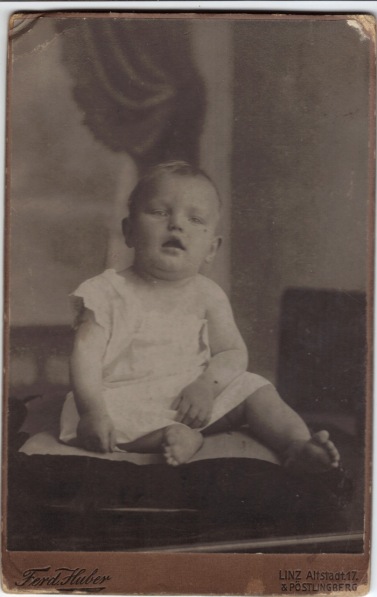 Johann Hochreiter as a baby, in Linz

Linz, the city where my grandfather Hochreiter was born in 1884 and lived until 1910, was also the home of Adolf Hitler for several years, from 1898 to 1907. It is not a connection I feel good about. Wikipedia noted, “Like many Austrian Germans, Hitler began to develop German nationalist ideas from a young age.[34] He expressed loyalty only to Germany, despising the declining Habsburg Monarchy and its rule over an ethnically variegated empire.[35][36]”  Learning the history of Austria’s connection and disconnection from other Germanic states, (see my last post) helps me to understand this somewhat, but the outcome was terrifying.

I was glad to read that in 1996, Linz became the first city in Austria to deal intensively with its own Nazi past.  There was widespread research by the municipal archives, and the culture of remembrance extended to the construction of monuments for the victims of National Socialism. But of course all of these events, including both World Wars, were after my own ancestor had emigrated to North America.

In my family, we didn’t really learn anything about Austria when we were growing up. As far as I can tell, there were no cultural aspects that were carried forward to us, except that, ironically and randomly, the only classical music album in our house was Johann Strauss’s Vienna Waltzes, including “The Blue Danube.”

In fact, it is the Danube River (German Donau) which has called most strongly to my heart, of all that I have learned about Austria.  (Not insignificantly, the Danube also flows through the city of Ulm where the Swabian line of my ancestors is located.) The Danube begins in the Black Forest and flows through southern Germany and through Austria, and then on to the Black Sea. The Danube valley in Austria is north of the Alps, and one of the most fertile and populous regions of Austria. This river is at the center of all its history and culture, and was the major East-West transport on the continent of Europe.

Linked to its location on the Danube, the Linz area was settled continuously, from the late Stone Age Neolithic period, in 4000 BCE. They have also found early Bronze Age urn sites and burial sites from the Hallstatt-period. In the first century AD, the Romans constructed a wood-and-earth fort to secure the important Danube river crossing to control traffic and for military reasons. They named it Lentia. In the second century it was expanded into a stone fort. It was part of the Roman frontier called the limes.

The official history site for the city of Linz notes there were many Goth invasions during the second century and that by the end of the 4th century A.D., the indigenous population is thought to have withdrawn to the easily defensible district of Martinsfeld in reaction to the advance of peoples from the East and West.

Upper Austria on the Danube seems to have been a crossroads of many peoples–who knows whether our ancient ancestors were part of the Roman colonizer settlements, or were the “Barbarian” hordes on the other side of the river? Or some combination of the peoples from “the East and the West”? In my personal DNA analysis, there seem to be fragments (less than 2%) of Italian and Eastern European ancestry–maybe they met along the Danube river in Austria.

So much is up to conjecture and imagination, except that it is clear they were of the so-called “lower” classes. Maybe my very ancient ancestors lived along the river, and then later migrated north to clear the forests and farm. Maybe they were a part of the Peasant Uprisings in 1626, or one of the 62 known uprisings in Upper Austria between 1356 and 1849. Maybe they were not. Day laborers. Weavers. Farmers. But in any case, around 1884, they left their rural connection to land and became urban city dwellers, and thus also came my grandfather to the cities of Ottawa, Ontario, and then to Detroit, Michigan. So much is lost in the translation. But I am glad to make the acquaintance of the great river Danube. 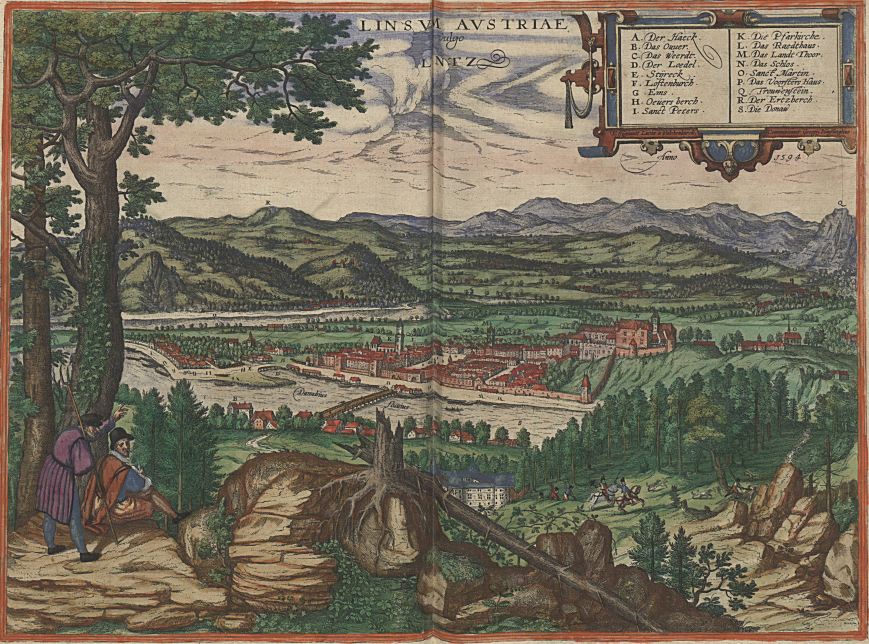 One thought on “What Does It Mean for Me to Be Austrian?”