“Racism Has No Home Here” signs are appearing all around my neighborhood.

I finally finished reading How to Be an Antiracist by Ibram X. Kendi. A friend loaned me her copy, but it took a while for me to warm up to the book because its approach was jarring to what I previously had held to be important about antiracism.  However, by the time I finished it, my understanding was deepened and changed in profound ways.

I had spent much of my activist life trying to get folks to understand that racism is systemic–it is more than just direct prejudice against people of another race, or hatred toward people of other races. Rather, it was a whole institutionalization of that prejudice by those in power.  Thus, while individual people of any race could hold prejudice, only white people and white systems could be racist.  Even if individual white people did not harbor direct prejudice, we benefited from these structural systems that kept racism in place. Thus, there was no way for us to be “non-racist.” Rather we must commit to being “antiracist,” and to use the privilege that structural racism had conferred on us to work against racism.

So right off, Kendi used examples of how he had been racist in various ways throughout his youth and young adulthood. He brought it back to a personal level, and did not agree that only white people could be racist. So that threw me off a bit. Later he explained it more directly. He wrote:

Like every other racist idea, the powerless defense underestimates Black people and overestimates White people. …[It] does not consider people at all levels of power, from policymakers like politicians and executives who have the power to institute and eliminate racist and antiracist policies, to policy managers like officers and middle managers, empowered to execute or withhold racist and antiracist policies. Every single person actually has the power to protest racist and antiracist policies, to advance them, or, in some small ways, to stall them. …”Institutional power” or “systemic power” or “structural power” is the policy-making and managing power of people, in groups or individually.  … The truth is: Black people can be racist because Black people do have power, even if limited.

Note that I say limited Black power rather than no power. White power controls the United States. But not absolutely. [p. 140-142]  [He then shared multiple examples of Black men in various government positions who advanced policies that were detrimental to people of color, and says:] These were men who used the power they’d been given–no matter how limited and conditional–in inarguably racist ways. [p. 149]

Another major shift he articulates is that racist ideas are created by racist policies, and not the other way around.

The history of racist ideas is the history of powerful policy makers erecting racist policies out of self-interest, then producing racist ideas to defend and rationalize the inequitable effects of their policies, while everyday people consume those racist ideas, which in turn sparks ignorance and hate. [p. 230]

So if we want to eradicate racism, we cannot merely use education and persuasion to try to get rid of people’s ignorance and hate, but we must work primarily to change racist policies.

I am pulling out these particular ideas in the book because they changed my own way of thinking about antiracism. Kendi speaks about how if we have incorrect understandings of the problem of racism, that inhibits our ability to be successful in our desire to create an antiracist society.

I would encourage everyone who cares about the problems of racism or other oppressions to get this book and explore all of his ideas, to see which ones might challenge and transform you. It is powerful and essential.

Racist: One who is supporting a racist policy through their actions or inaction or expressing a racist idea.

I am trying to catch up on my blogging about all the garden excitement last week, but then we had some more drama this week.  On Saturday, I was able to plant the second asparagus bed, along the side of the garage.  (Sylvia and I had planted the first bed last Wednesday and then started digging the trench for this one.)  Saturday, I finished digging the trench–which also involved pulling out lots of big and small rocks.  Then I added compost and a bit of rock phosphate and wood ashes.  I positioned the crowns on little mounds, spreading out their roots in a star shape around the center. 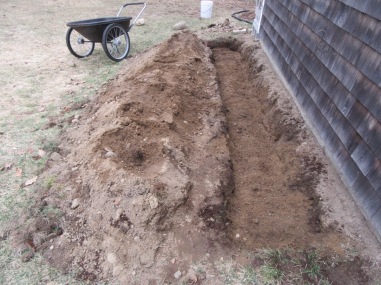 The part I couldn’t photograph was me trying to lean over the big pile of dirt on the side, to actually reach into the trench to position all those crowns.  It was pretty funny.  After that, I covered them with more compost, and then soil.  As the spikes emerge, you are meant to keep covering them so that only a couple inches show, until the soil is even with the ground again.  So this next photo is rather boring, just a trench of dirt really.  But now you know what is hiding underneath.

THEN, on Monday night we had torrential rain here in Maine.  Tuesday morning, when I woke up, this next photo was what I saw out my window.  The rain barrels and their foundations had toppled over.  I had extended the trench a couple feet beyond the garage wall, along the side of the rain barrel, thinking that the asparagus would be lovely next to it.  And all might have been well once the trench was filled in again.  But when the rains came pouring down, the soil was weakened, and the barrels were at their heaviest.  The cement block near the edge must have sunk down, destabilizing the balance of the barrels, and the whole set-up collapsed.  The cement blocks fell into the trench.

I was able to pull out the blocks, and move the barrels, but will have to wait until the ground dries out a little to set them up again.  I guess I had better fill in that end of the trench before I do it too.  Margy always is reminding me that mistakes are a part of this process–that I am learning as I go along.  Yep–don’t dig a hole next to your rain barrel foundations!

During our ritual celebration yesterday evening for Imbolc/Groundhog Day, we scryed with the magic of the fire in our wood stove.  Scrying is a form of seeking wisdom, by gazing into some sort of medium–such as a crystal ball, tea leaves, a bowl of water, a candle flame.  It gets a bad rap on Wikipedia as “unscientific.”  But as one person mentioned last night, while meditation may sometimes be difficult, there is something about quietly staring into a fire with each other that brings one to a state of stillness within.

When we find that stillness, we have access to our own deeper wisdom, and the wisdom of the deeper mystery. Some people see images in the fire. Others notice whatever thoughts or feelings emerge in the stillness of gazing.

Here is what I noticed on the way to the wisdom in me:  First of all, a sense of deep weariness.  Then, a desire to stop doing so much out there in the world, to pay attention to what is happening within.  Then, a feeling of how difficult it is to say no to invitations to activism on issues that are important.  There is so much hard stuff in our world right now, and so many good people are responding.  How do I know when I should be taking action, and when I should be in stillness?

Then, a fear that if I choose to say no, I will disappoint people, lose their love and acceptance. Then, a realization that that motivation, that fear, is not a source of wisdom, but rather a wound that needs healing.  I sat with the fear for a while, gazing still into the fire, opening my heart to the healing energies of the mystery.  We were celebrating Brigid after all, who is a Celtic goddess of healing. We had brought into the circle a small bottle of water from one of Brigid’s wells in Ireland, and I anointed my forehead and heart and hands with some of that water.

Deeper still, I realized that I am in the midst of a profound change.  I am shifting from one identity, one chapter of my life–as the minister of the Allen Avenue Unitarian Universalist Church, to another identity, another chapter–as yet unknown.  What I most desire is something like a cocoon in which to make that transformation, just as the caterpillar encloses itself for its transition to the butterfly.

This “enclosing myself” is not the same as doing nothing at all.  There are activities that directly relate to this transition–processes of ending, closing down, completing the work. I notice how hard it is to turn my attention away from the usual activities of my current/former self, to pay attention to the transition.  And in understanding this, I realize that I have to be courageous enough to say no to some good and important activities and activism. I have to say no, so that I can be courageous enough to say yes to the transformation.

Unitarian minister A. Powell Davies said “Life is just a chance to grow a soul.” He was known for standing up against injustice, and working on behalf of freedom, democracy and equality. For Davies, being fully alive meant living according to these values, and shaping the future toward a vision of connection and community. He spoke of the inner life at the heart of his actions:

“There is no mystery greater than our own mystery. We are, to ourselves, unknown. And yet we do know. The thought we cannot quite think is nevertheless somehow a thought, and it lives in us without our being able to think it. We are a mystery, but we are a living mystery…

In the mind’s dimness a light will shine; in the spirit’s stillness it will be as though a voice had spoken; the heart that was lonely will know who it was it yearned for, and the life of the soul will be one with the life that is God.”

For Davies, growing the soul means attuning ourselves to this inner light, becoming one with the life that is God.

Quotes from Davies from an article by Manish Mishra.