For many years, I supported the campaign to free American Indian activist Leonard Peltier, who had been convicted, many said wrongly, of the death of two federal agents in a shoot out on the Pine Ridge Reservation.  Even Amnesty International signed on to his case.  But after moving to Maine, I learned more about the murder of Annie Mae Pictou Aquash, and I began to have reservations.  I stopped my support, but didn’t really know how to speak about it.

Yesterday, via my friend Sherri Mitchell’s Facebook feed, I started to listen to a live feed of the National Inquiry into Murdered and Missing Indigenous Women and Girls that was taking place in Montreal. Denise Pictou Maloney was testifying about the death of her mother Annie Mae.  I listened for an hour and a half, and then after she had completed, I went back to hear what I had missed at the beginning of the tape. 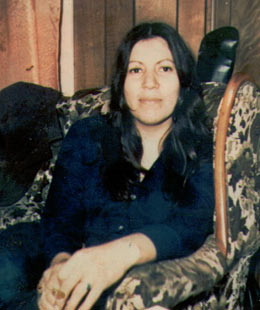 Annie Mae was a leader in the American Indian Movement, originally from the Mi’kmaq First Nation at Indian Brook Reserve in Shubenacadie, Nova Scotia.  I first learned about Annie Mae in the song by Buffy St. Marie, “Bury My Heart at Wounded Knee”, in which she sang,

The implication, the narrative, the story so many of us believed for many years, was that she was killed by the FBI.  But in fact, the truth later came out that she was killed by other AIM members.  In 2004 and 2010,  Arlo Looking Cloud and John Graham were convicted of her kidnapping and murder.  They also implicated AIM leadership in her death, though no one was ever charged.  You can find out a lot more if you listen to the tape of Denise’s testimony, or even if you look up Annie Mae on Wikipedia.

Hearing the pain in Denise’s voice moved me to want to speak publicly this time.  It feels risky to do so, because, as a white person who tries to be an ally, a co-conspirator, with Indigenous people, I know that I will always know too little about all of this.  I do know that the FBI tried to sow dissension in the ranks of activist movements, especially those of Indigenous people and people of color.  This included planting informants within the movements, and also casting suspicion on dedicated activists to cause others to suspect that they might be informants.  This is one theory about the motive for killing Annie Mae.  Another theory claims she was challenging AIM leaders on their behavior, or that she had heard Leonard brag about killing the agents.  I don’t know the answers to that.

But I want to speak today, despite not knowing all the answers, because I have in the past spoken in support of Leonard Peltier.  Denise talked about how painful it has been for their family, every time there is more public support for Leonard.  So I want to interrupt my own participation in that process, (which most lately has been through my silence), and let my friends and colleagues know that I can no longer support Leonard Peltier’s campaign for release from prison.  And I also want to acknowledge how difficult a journey we make when we intend to be allies or co-conspirators.  We often make mistakes and get it wrong.  But that does not make it less worthwhile to try, to show up for what is right.

For those who love the truth, the current administration can be maddening.  I just think about the rejoinder used by Counselor to the President, Kellyanne Conway, in which she defended White House Press Secretary Sean Spicer’s false statements about the numbers of people attending the inauguration.  She said, they had “alternative facts.”

But, then I found this post on Facebook at Rising Tide North America, which put a new layer into the equation for prophetic witness.  When Trump or his staff make outrageous untrue statements, these are not statements of fact, but statements of intent, stating what would have to be true to justify their next actions. Thus, we should not be trying to fact-check their big lies, but rather read into them what we can expect will be the next assaults on all that we hold dear.

For ex., Trump is not saying that 3 million undocumented people voted. What he’s saying is: I’m going to steal the voting rights of millions of Americans. 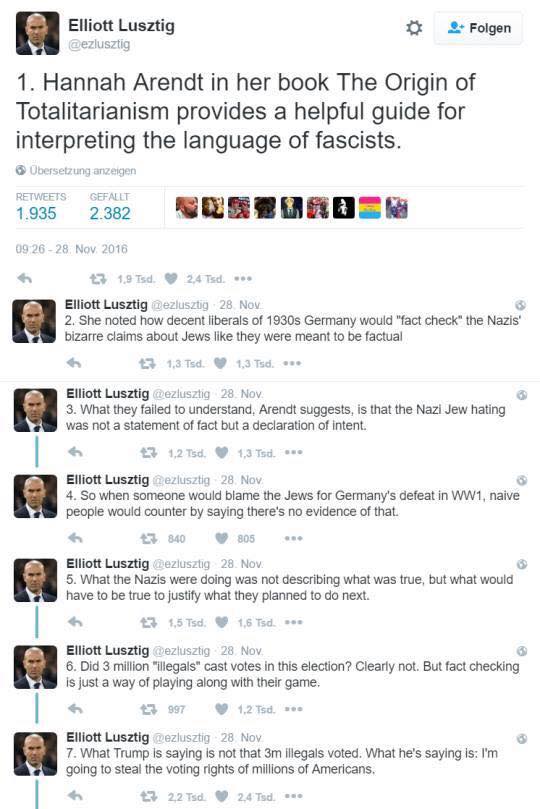 Right now, there are so many layers to see, and sometimes what is on the surface may be important to us, but is actually being used as a smokescreen for something else that has been hidden. We’ve got to really search for the meaning underneath events, for the important truths hidden behind the drama.

For example, a week before the inauguration of Donald Trump, Representative John Lewis stated that he would not attend it, because he felt that the interference wielded by Russia cast doubt on the legitimacy of the election. Trump immediately attacked Lewis in a tweet, said he was all talk and no action. The media rushed to defend Lewis, bringing out interviews about how he is a true American hero in the cause of Civil Rights. It might seem that they were trying to speak real truths in the face of falsehoods.

But later I read an article in Daily Kos, an online news journal, that gave me new insight about this. The writer, Dartagnan, pointed out that Trump is an expert on creating flashy outrageous distractions via his tweets, and most of the media follow along—so no one was paying much attention to why the Russians may have been trying to influence the election. Dartagnan uncovers the deeper story that much of the media ignored. He writes:

“In an interview with the Wall Street Journal on [January 13], Trump confirmed that he’s “open” to lifting sanctions imposed by the US against Russia… The media are lazily treating Trump’s statement as if [the most recent sanctions] are the only sanctions “at issue.” But they’re not.  The far more significant sanctions are the ones [the US] imposed [in 2014] for the Russian invasion of Crimea.  In particular, imposition of those sanctions put up a roadblock to a $500 Billion dollar oil deal between ExxonMobil and Russia for jointly developing oil and gas properties in the Arctic.

….The Russian “state-owned” Rosneft corporation, [is] run by Igor Sechin, ….Putin’s “de facto deputy.”  Sechin was specifically sanctioned by the Treasury Department in 2014 as a response to the destabilization of Ukraine and the deal was blocked by those sanctions. Putin knew going in to the 2016 election that if he could install [someone] like Trump those sanctions would very likely be lifted in a heartbeat, with billions of profits going directly to Putin and his cabal of oligarchs, all with enormous financial interests in the project. …The deal was in fact authored by [Rex] Tillerson, which gives us a clear rationale why he is the perfect person, from Putin’s point of view, to be our Secretary of State.”

Our capacity to exercise prophetic witness is dependent upon our ability to see through the smokescreens put up by the new administration, and dig deeper for the power deals that are being conducted, and for whose benefit. It means turning to news sources whose reporters are willing to dig deep to uncover the issues beneath the surface.

Understanding the implications of the Exxon-Russia deal makes me wonder if most of Trump’s more outrageous statements are merely meant to stir up his base, and inflame his opponents. Perhaps he doesn’t really care what happens to women, or people of color, or GLBTQ people, or Muslims, or even immigrants—not that he can’t generate a lot of damage. Damage has already been done.

But it also may all be a distraction to syphon off the energies of resistance, while he quietly goes about consolidating the power of the super rich and multinational corporations. It may really be about generating outlandish profits through a complete corporate takeover of the land and resources of this country. That could be fatal to the environment and the capacity for all of us to have a future on this planet.

I am not saying that we should ignore what is happening to people who are vulnerable to this new climate of hate. We must continue to speak and act in solidarity with all who are targeted. But to be a community of prophecy we must open our eyes on many levels, and reveal what is meant to be kept hidden. 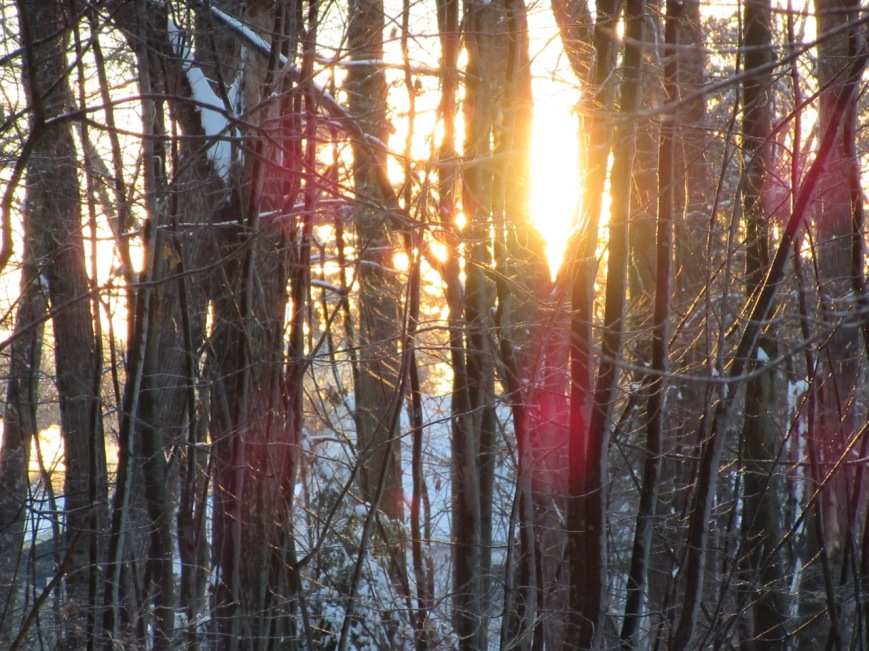 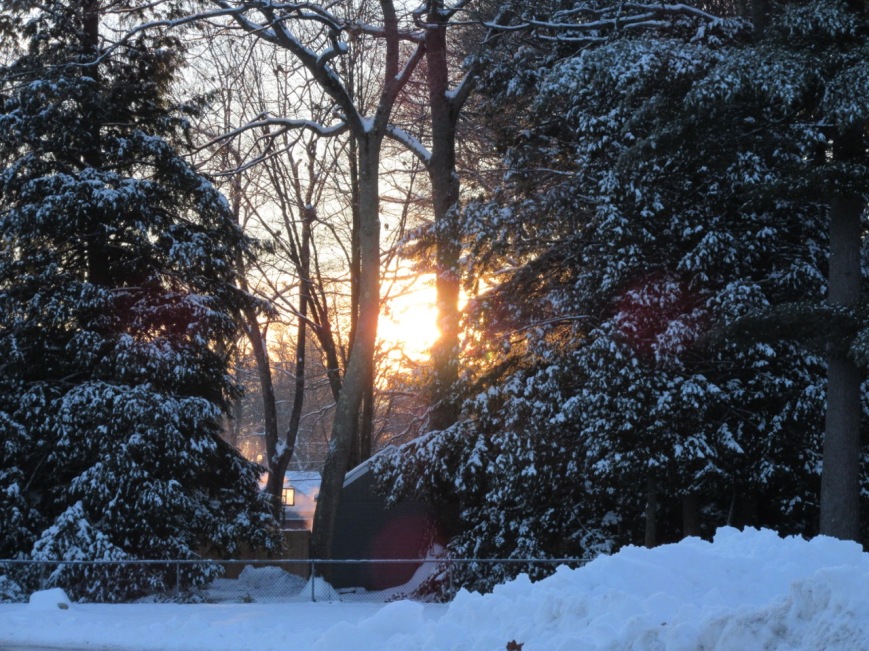 These are capacities that each of us has, to varying degrees. We can’t always see clearly what is going on—but by sharing what we can see with others, by listening to what others see, we can form a better picture of what is going on, a truer understanding of what is happening.

The Quaker educator Parker Palmer recently described patriotism as a “lover’s quarrel with our country.” He reminds us to quarrel lovingly and passionately about truth, about “what is and isn’t true.” Many of the president’s enablers are saying truth itself doesn’t matter anymore. If you repeat a big lie enough times, people will begin to believe it. Or as one person said, “There’s no such thing … anymore of facts.”

We who hold the quaint belief that it’s often possible to tell whether what comes out of a mouth is true or false need to assert the facts every chance we get. Last week, for example, the man who says that only he can save our economy claimed that there are “96 million…wanting a job [who] can’t get [one].” False. There are “roughly 96 million people not in the labor force, but that includes retirees, students and others who don’t want jobs. Only 5.5 million of them want work.” The unemployment rate, which neared ten percent every month of 2010, was five percent or less every month of 2016.

He goes on to say:

Facts are so tedious, aren’t they? And they won’t change the minds of true believers. But we need to preserve them for the same reason Medieval monasteries preserved books: the torches have come to town. Let’s try to remember that science and the Enlightenment gave us ways to test the truth-claims of potentates and prelates, laying the foundations for our little experiment in democracy. Until someone blows up the lab, we must proclaim the facts, then tuck them into a fireproof vault until we need them again.

I am thinking about the scientists who began downloading climate change research data from government websites, to preserve the research against the possibility that a new administration would take it all down. Fighting for and preserving truths in a time of propaganda.

Note:  Rebecca Parker quote from, “Rising to the Challenge of Our Times,” in Walter P. Herz, Redeeming Time: Endowing Your Church with the Power of Covenant, p. 66-67.