At winter solstice, the sun begins to rise earlier each morning, but only by about one minute every couple days.  As we approach the spring equinox, the changes begin to quicken, each day the sun rises earlier by one or two minutes a day. It doesn’t sound like much of a difference, but I feel this sense of speeding up. This morning, I woke at 6, and found myself jumping out of bed, wanting to get outside as quickly as possible, so as not to miss the dawn. 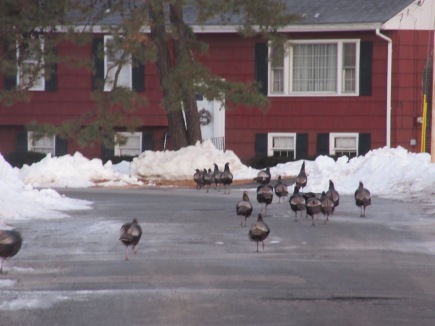 I was not disappointed. First of all, there was the waning moon shining bright in the western sky.  Then there was the gang of turkeys marching down the end of my street.  Twenty strong, they roam the place like they own it, and they do, as much as we do. Around the corner, a neighbor walks her little dog: Sparkles is still a puppy and just can’t contain herself when I approach.  She is trying to learn not to jump.  But she jumps. So we say our good mornings with enthusiasm.

On my own again, around another corner, I hear a cardinal singing. He is already looking for a mate, or marking out his territory. I can see him in the tree, his characteristic shape visible with its tufted head, even though he is too far away to see the brightness of his red feathers.

The streets are a mix of clear pavement and icy patches, so I make my way carefully, no rushing.  But I feel buoyant in the  early morning light.  Finally, I approach the brook, and look over to the east, where I catch my first glimpse of the sun rising through the thicket of trees.

I am a morning person, but I usually don’t like to get up before 6 a.m. Just before sunrise is my favorite time of the day, but if it gets too early, I have a hard time making it out of bed.  In this regard, I will be saved by Daylight Savings Time on March 10. The sunrise would have been at 6:03 that day, but we jump our clocks ahead, so it slides back to 7:03. Then we have all the days until April 15 before it approaches 6 a.m. again. Nonetheless, everything is starting to wake up now. Buds are starting to appear on the fruit trees. Birds are singing. They know.

[True happiness is not in buying things, but in being thankful for all that we already have. You can ignore any ads that appear at the end of these posts.]