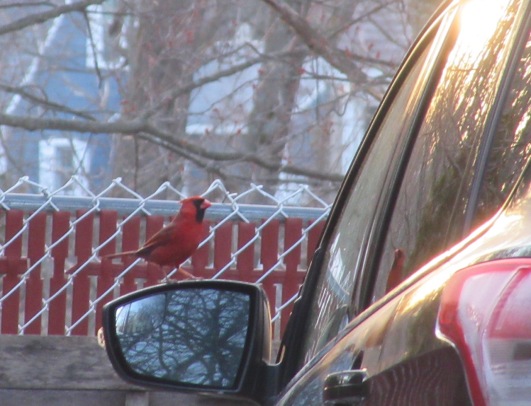 The earth is waking up in our neighborhood, and all her creatures. I love the cacophony of bird song that I hear when I walk in the morning. The other day I saw this little red fellow pecking at the side mirror of an automobile parked in a driveway next to a long hedgerow of bushes. It is a common cardinal thing. When he sees his reflection in the glass, he thinks it is a competitor, and tries to defend his territory. If you look closely, you can see his reflection in the glass too, though most of the time, I see him pecking the side mirror, not the car window. 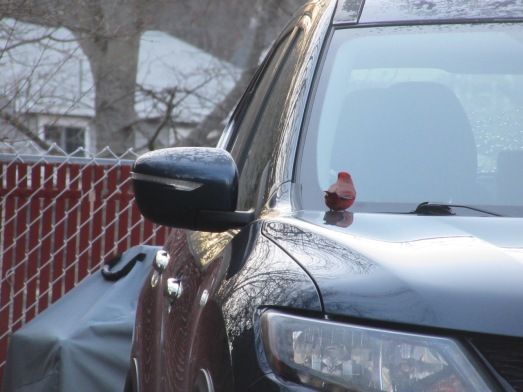 Cardinal on car, 2019–He had jumped from the side mirror just before I snapped the shot. 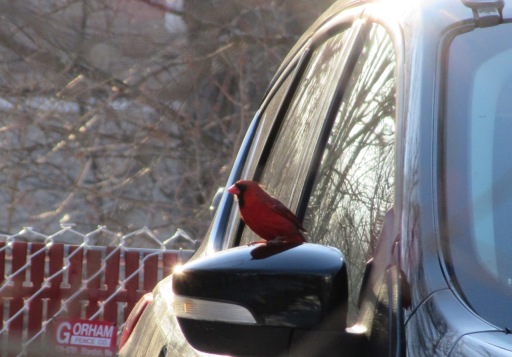 As for me, I finally braved my spring ritual of pruning the cherry trees in our food forest. I am still such a novice about all things concerning fruit trees and each year I forget the whole process and have to relearn it, and then hope for the best. After reading all the entries on pruning in the Holistic Orchard book, I felt even more confused. So then I looked at several Youtube videos on pruning cherry trees. (By the way, there wasn’t one perfect one, or I would recommend it here.) Finally, I ventured out, and with a prayer to the trees themselves for help, I trimmed back wayward and unruly branches so the three-years-from-planting trees will have strong scaffolds, and lots of light. Next, I’ll have to venture to the peach tree, which has a totally different method for pruning.

I have also started a bit of terracing next to our asparagus bed near the side of the garage. There is a slope there that didn’t work to hold grass or clover, so our hope is to make a path a little lower than, and next to, the asparagus bed, with logs on either side to stabilize the soil. Then we might put in some sort of annual vegetable bed on the other side of that path. Most likely, we’ll do a small sized hugelkultur mound raised bed.  But more on that later. If we do it, I’ll write another blog post about it.

I hope you are finding time to get outside and observe your own spring rituals.

2 thoughts on “Rituals of Spring”