[The side boundary two weeks ago.]

Boundaries in land are something of a legal fiction.  The land can’t really be owned by anyone.  But they do matter, because we can only protect the land that is within the boundaries identified as “ours” by pieces of paper.

The other day, a neighbor who lives to the side of the back of our yard mentioned that they might want to put in a fence.  We were alarmed that they might cut some trees, but then they said they were not planning to do that.  But they got a little riled by our asking about the trees.

The thing is, we didn’t get a chance to say this, but we had thought that the trees between our properties were on water district land, because our deed identifies our boundary as bordering on water district land.  [You can see the line of trees and bushes behind our compost bins in this photo from two weeks ago.]  But today I did some research and discovered that their deed in fact includes at least some of the water district land, and perhaps might come right up to ours.

It is all both explicit and very vague on our deed, especially in reference to the back half–because it refers to the old Portland Gardens plan.  For example, where that part of our land begins is stated to be about 99 feet across, while the back line of our property is stated to be 161 feet across.  But it is unclear exactly how and where it is anchored or where it expands–it doesn’t correspond to what was mowed as lawn.  (And it would cost thousands to get a survey, we were told.)  And if you look on the current tax map, the water district land seems to be 53 feet across between the properties.  But I don’t see how there are that many feet between us, even if all the “hedge row” is included.

However, the deed for the neighbor’s yard cites an iron pipe at the corner boundary next to their road, and then “83.31 feet to an iron pipe and land now or formerly of the Portland Water District.”  The wording is odd–but I found an earlier deed that ceded some 56 feet of PWD land (on that side) to that parcel–and it makes sense, they couldn’t have built a house on the land without it.  Then it angles back to a narrow point further back.  Sometimes I wonder if it is all something of a fiction–maybe the plan for Portland Gardens didn’t really match the actual land, and nobody actually has the number of feet listed.

But all day today I have been worried about the trees.  The black cherry and the cedar.  The ones I haven’t learned the names of yet.  We love the trees for themselves, and also for the privacy they create in this place during the summer.  Margy has spent a lot of time cutting down bittersweet from these trees.  And I’ve been wondering where the boundary really is.  There is too much snow right now to hunt for that iron pipe.  But I surely will as soon as enough has melted.  It all feels so vulnerable. 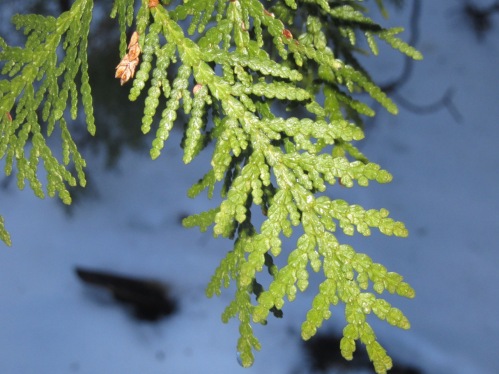 I seem to have unleashed a thirst for learning the names of all the trees who live with us on this land to which Margy and I belong. Today, I am exploring the cedar tree in our southeastern boundary area. I had always wondered about the difference between cedars and arborvitaes, and now I know that they are the same, really, here where we live.  There are a lot of names for this species which is native to southeastern Canada and northeastern United States–Eastern White Cedar, Northern White Cedar, White Cedar, False Cedar (because it is not related to European cedars).  Its Latin name is Thuja occidentalis.

It was first called Arborvitae by French explorers when Indigenous people gave them tea  made of its leaves as a treatment for scurvy.  Arborvitae means “tree of life.”  Now, arborvitae is the name used by horticulturists, and there are many cultivars of the tree that are sold for landscaping.  The Anishinaabe people called the tree Nookomis Giizhik or Grandmother Cedar, because of its importance as a sacred and medicinal tree, associated with one of the four directions.

This has been a special tree to me personally in most of the places I have lived–Michigan, Chicago, northern New York state, Massachusetts, and Maine, and I appreciate that my matrilineal ancestors also knew this tree in Quebec/Nitassinan.  The Innu word for this tree is Massishk.  The tea from its leaves contains an abundance of Vitamin C, and can be used as a medicine.  (Note–being cautious, it is recommended that pregnant women should not use cedar tea because the compound thujone within it.)

The tea of simmered branches is used to treat fevers and rheumatic complaints, chest colds, and flu. This brew is delicious warm or cold and is simple to make. Just simmer 2 cups of fresh cedar in 4 cups of boiling water for about 10 minutes until the water becomes a golden color. Strain off the cedar and sweeten with maple syrup, to taste.